Chris DeMarco Salvage 2 color photograph
This year's Photography Regional is sponsored by Fulton Street Gallery in Troy, but it (mostly) hangs in the mall-like Uncle Sam Atrium nearby, which is both a blessing and a curse. Pulling a show as democratic in spirit as this one out of the white-walled sanctums of fine art and putting it before the general public is a good way to go, though it does reduce the seriousness with which it will be taken by some people (and it forced Fulton Street to segregate some of the art, such as the nude shown below at right, in their own more secluded space at the gallery, so as to avoid controversy at the Atrium).

Les Urbach, the founding father of one of the Regional's founding organizations (Albany Center Gallery), was a huge proponent of art in public places - so I know this installation would have pleased him greatly were he still alive to see it. Clearly, juror Carrie Haddad picked up on that generous spirit in her choices, which are the most eclectic and inclusive of any Photo Regional in memory. I think this is due as much to the bigger space allotted as to Haddad's openness.

But there can be too much democracy, and a show can be too big. To put it simply, this is a rambling, rollicking, fun collection of work by a great number of regional photographers of all stripes - and it would be much, much better if it had been edited down by at least a third. To Fulton Street director Colleen Skiff's credit, the arrangement of the 106 pieces at the Atrium (five others hang at Fulton Street) has many passages of real inspiration, where visual or conceptual themes have been established and delightfully played with. 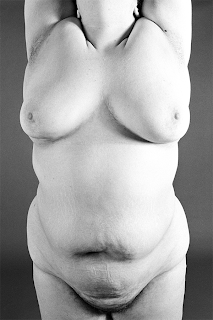 That alone is good reason to go there and spend time in the space (as opposed to scanning all the images online at the gallery's website), because it creates a unique and validating art experience. But a group show this vast and tradition-bound is still, always, about the individuals chosen to participate. Among the 64 (chosen from 97 who submitted), there are a lot of lesser-known names, which is just what you want from an annual juried show, where new faces get the opportunity to shine.

Most of the prize-winners are younger or new on the scene - or just persistent folks who finally got picked after all these years. In the first category (and having taken First Prize) is Jennifer Morse, whose White Ponds series of three color details of an exurban housescape demonstrate that you don't have to be gimmicky to make powerful photographs in the 21st century. I'd never heard of Morse, but her shots were my favorites from the Salon (where all entries got to be seen before judging), so I guess you could say Haddad and I agree where it counts.

The second and third prizes also went to relative newcomers - Carrie Will and John Yost - who both work in color and offer social commentary: Will by presenting the visual conundrum of herself and her (apparently) twin sister in posed portraits (one is shown at the bottom of this post), and Yost by taking on more global issues in tiny, painterly vignettes (one, titled War of 2012, is shown at left near the top of this post). 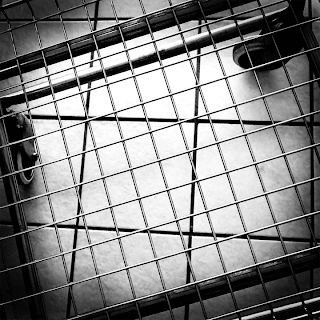 Honorable mentions included Diane Reiner, a longtime veteran of the scene, and Bob Foss, equally long in the tooth but only recently breaking out. His black-and-white study of a shopping cart (shown above) is a sweet visual poem that evokes Modernism at its graphic best.

Oddly excluded from the show are works by several Doane Stuart students that I saw in the Salon and thought were amazingly sophisticated (their teacher, Sarah MacWright, is represented by a nice alternative-media piece showing a pair of shoes). Also absent are gorgeous color prints from cell-phone photographs that Mark McCarty had submitted. I can't imagine why Haddad wasn't taken by those, but that's part of what makes a juried show interesting.

Other strong work well-represented includes a pair of richly colored images of quirky collections by Linda Morrell and a trio of majestic Icelandic scenes by Michael Marston. But here I need to express a word of caution to Marston and some others (listen up, Tom Chesnut and Nancy Noble Gardner): If you keep showing the same work over and over again, people get bored and then come to the conclusion that you aren't working very hard. Please stop that. Make some new pictures already, OK?

There's lots more work in the show worth commenting on, but it's time I stopped and let you go see it for yourself. The show continues through May 22.

Thanks for featuring Bob's photo here. I've been fortunate enough to get to know him a little and talk about many subjects, photography-related and otherwise. He's thoughtful, inspired, and deserves this recognition (and more). I'm also glad to see John Yost rating so highly; while we've fallen out of touch since high school he's one of the most creative people I've met.

Congrats of course to everyone in the show. Great to see the area continue to show intrest in the arts.

Bob definitely deserves the credit, he is a quiet force to be reckoned with :)

Linda Morrell had some pieces to show at 4th Central last First Friday. Quirky indeed, and inspires me to print *large*.

"If you keep showing the same work over and over again, people get bored and then come to the conclusion that you aren't working very hard". So very true, and something I keep in mind for the future.