Norman Rockwell: Behind the Camera 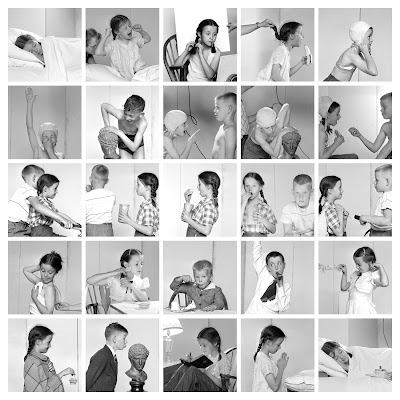 Growing up in the 1960s, I loved Norman Rockwell’s art. It was folksy, funny, and almost photographic in its realism – things kids can appreciate. Later, I came to value Rockwell as much for his social and political courage as for his abilities with paint. Now, I have a new reason to admire this much-loved and much-scorned American artist – for the astonishing directorial work that backs up each of his illustrations.

It is probably no accident that the Norman Rockwell Museum in Stockbridge, Mass., has mounted the exhibition Norman Rockwell: Behind the Camera at this point in the history of art. Another Berkshire-county artist, Gregory Crewdson, is the person most responsible (well, after Cindy Sherman) for having established directorial photography as the most significant art movement of the past 20 years.

Yes, you read that exactly right: I am comparing Norman Rockwell to Gregory Crewdson – unironically. To continue the comparison, think of them as two sides of the same coin. On one side, there’s a patriotic, corny optimist, a shamelessly commercial image maker whose work always brought in a good buck by sending the right, cloyingly positive messages about America. On the other, there’s a Hollywood-tinged postmodernist, biliously cynical, whose work has also brought in big money because of its jaundiced and dark messages about the same America a few decades later. 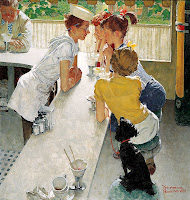 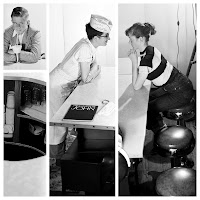 The exhibition shows in well-notated detail and perfectly mounted imagery how Rockwell performed his craft. No, not the craft of painting (which I will always contend he did exceedingly well) – the directorial craft of planning, casting and organizing, and then photographing, piece by piece, the visually complex (if conceptually simplistic) dramas that typify his work. Rockwell himself did not release the shutter – that work went to various professionals over the years – and neither, by the way, does Crewdson, though he is known as a photographer. This is a director’s art in both cases, with the result being a still image rather than a movie.

For fans of Rockwell, the exhibition is an endless parade of favorites, now made new by the revelation of the process behind them. You would have to be the angriest curmudgeon not to take pleasure in seeing, for example, how the hundreds of black-and-white photos snapped for “A Day in the Life of a Little Girl” (see top of post) were created and then transformed into the full-color illustration of the same name. 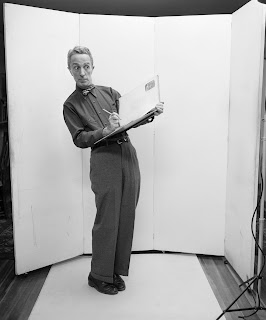 For locals, there is no doubt the joy of recognizing faces from the past, as Rockwell used his neighbors for these pictures, in part so that he could bring “an unmistakable genuineness” to the faces in his scenarios. Still, in examining the side-by-side displays of source photos and finished paintings, one can see how much he exaggerated features for increased comic effect, almost to the point of caricature, while still somehow retaining that patina of realism.

Part of the fun is seeing the artist himself performing for the camera, both as a subject (very often recognizable in the crowds he loved to paint) and as an auteur encouraging his models. It’s clear his enthusiasm never waned, and his expressive skills were right up there with the best of his subjects. Many tricks and props are also visible, such as hands or wires holding up a pigtail to simulate speed, or books set under toes and heels to represent a proper gait.

Clearly, Rockwell’s directorial method was both well honed and essential to the making of his art. That it was also a precursor to the most heralded and high-priced artists of our present time is an idea so preposterous and yet so deliciously subversive as to be irresistible. Sherman, Crewdson et al: You owe this guy some respect.

Norman Rockwell: Behind the Camera opened last fall and continues through May 31. The museum is open every day, and it’s a pleasant 45-minute drive from downtown Albany to a beautiful setting in the Berkshires. Coming up next at the Norman Rockwell Museum will be an exhibition of work by the New Yorker cartoonist William Steig, which opens on June 12. 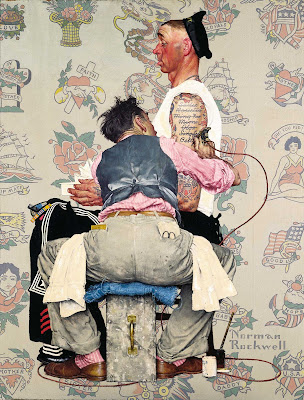 All images courtesy of Norman Rockwell Museum
Posted by david brickman at 2:15 PM

My wife would LOVE it.
I appreciate Rockwell, though I was, with a few exceptions, more in tune with his latter work, the LOOK covers.

I am savoring the dynamic tension as I force Crewdson and Rockwell to occupy the same mental space and time! Thank you again David. And that they hail from the same area...wow.