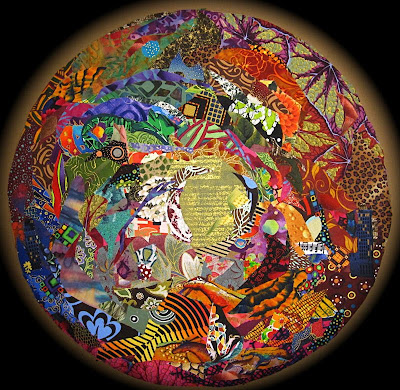 I'm glad the exhibition Color Moves at RPI's Shelnutt Gallery continues through the end of March, which is not Black History Month, though it did begin on Feb. 1, which is. Yes, the five artists in the exhibition (Francelise Dawkins, Ayriel Hunt, Femi M. Johnson, George W. Simmons, and Stephen Tyson) are black - but they have a lot more in common, and a lot more to offer viewers, than their racial identity.

Before I get into the specific qualities of the works in the show, allow me to ponder the issue of segregation. The art world is largely liberal, but segregation can exist there as much as anywhere. And it doesn't necessarily have to do with race, nor is it necessarily bad. For example, we regularly segregate artists by medium - showing painters with painters, sculptors with sculptors and so on. There is also a tendency to separate older artists from younger ones, male from female, conceptual from representational, major from minor. These types of divisions often make sense and help the viewer understand the work within its context.

A lot of times, though, I think curators go too far to separate. While women artists were unfortunately ignored through most of history, does it make sense in 2011 to have a show just of women artists? Ethnicity is another tricky zone - we probably wouldn't balk at the idea of a show featuring Asian or Latino artists, and clearly it's considered good politics (especially in February!) to organize a show around the artists' blackness - but what would happen should someone mount an exhibition specifically restricted to the work of gay white men, or American Muslims? I'm just not sure I see the use in all that.

So I'm glad this show of five worthy artists has its month of March. The gallery has a tradition of showing ethnic artists' work, and that's a fine thing to do; it is a fairly non-traditional space upstairs in the Rensselaer Student Union, where the walls are clean and the lighting effective, though it also serves as a meeting room, so access can be limited and the furnishings do get in the way a bit. If you go, the best bet for parking is in the visitor lot next door, where meters can be fed.

This year's edition of Color Moves (it's an ongoing series) weaves common threads and themes among the group: colorful abstraction fairly dominates, collage is the medium of three of the artists, and there is a certain graphism throughout. Two of the artists are using non-rectangular shapes, and the materials are mostly outside of the mainstream (fabric, carbon paper, wood, acetate). 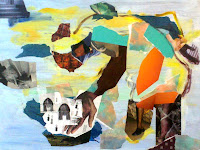 All this makes for a fresh and compatible array of artists who are nonetheless rather divergent in their approaches and (one would assume) intents. The oddest one out would be Hunt, who is a student at RPI whose work fits squarely in the mode of graphic design (one piece is shown at the bottom of this post), and has the clearest messages in it. Her deft, assured drawing style blunts the force of Hunt's confrontational subject matter, which seems to be suburban black youths' need to be more aware of history.

Also somewhat narrative are Johnson's painterly collages, made of torn paper fragments that articulate figures in a very loose way and use color whimsically. I especially like the most recent of his four pieces in the show, titled Night Train (another, titled Village Keeper is shown above at right).

Dawkins' and Tyson's works are intermingled on one wall, nearly competing with each other in terms of vivid color and rounded forms (one of Dawkins', titled Sanctuary/Still Waters is shown at the top of this post; one of Tyson's, titled Tempo, is shown above at left). Dawkins, a fabric collagist, wields a wild pair of scissors to make vibrant compositions that are as complex as they are playful. Two earlier pieces (both circular) are more muted, layered, and soft than the two newer ones, which are more direct. The larger of the two, which is her only rectangular piece in the show, is liberally peppered with images of fruits and birds. 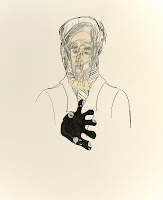 Tyson, a Siena College professor, has a history of making busily patterned abstract paintings. His four pieces in this show, all dated 2009, are brightly painted, shaped planks and slabs of wood with stripes, color-field elements, soft geometry, and metallic gold. Their rhythms show jazz as a clear influence, but two of the titles (Asteck and Eltem) mystify.

Simmons appears to be the most prolific of the group. His 12 collaged drawings in the show include four from earlier periods (1996, 2004 and 2005), two from 2010, and six from 2011, and they remain consistent throughout. Still, though I've known Simmons and his work for 30 years, I am still hard pressed to describe or explain it.

A pair of "self-portraits" (one is shown above at left) are somewhat revealing of the artist's thoughts, while containing elements of the other works. Altogether, they are crudely assembled with bits of Scotch tape, yet elegantly ethereal. Simmons incorporates scraps of his own work in various media to make these pieces, which represent a truly personal vocabulary that only a dedicated and quirky artist could possess.

Vignette at the Arts Center

Also in Troy (through Mar. 20) and not to be missed is a very thoughtfully curated exhibition of five artists at The Arts Center of the Capital Region titled Vignette. Joel Griffith, Ingrid Ludt, GG Roberts, Rebecca Shepard, and Ann Wolf are a rather eclectic bunch who have been brought together by the ex-Metroland critic Nadine Wasserman, who wrote this statement:

For much of art history, narrative art functioned as a way to tell a story or to represent a religious, historical, or allegorical event. With the advent of modernism, however, direct story telling was derided and the narrative form was transformed by abstraction and non-linearity. With postmodernism the narrative remained suspect and artists created multifaceted work that further fractured the notion of “grand” narratives. But artists have never stopped creating narrative work. Even abstract and non-representational art can be narrative and can contain coded references to political, social, and personal issues. This exhibition presents five artists each working with narrative structure but each bringing to it a unique approach. Taken together these artists present a variety of styles encompassing abstraction, surrealism, seriality, realism, and fiction.

In quick capsules: Roberts' three paintings in the show are exuberantly kitschy - I wish there were more of them here to see; Ludt offers 18 works, in a group of 10 slightly larger ones and eight slightly smaller ones - they are gestural, intuitional, oddly colored, light; Wolf uses gouache in monochromatic swaths of expert rendering to evoke fairytale landscapes; Shepard's pencil drawings subtly seduce the eye with sad little tales, while paired drawings and patterned-paper collages nearly steal the show; and Griffith's masterfully painted streets are a blend of Maxfield Parrish and Gregory Crewdson - first noticed at the 2010 Mohawk Hudson Regional, he is a force to be reckoned with (the image below is titled Scism Road, Trailer). 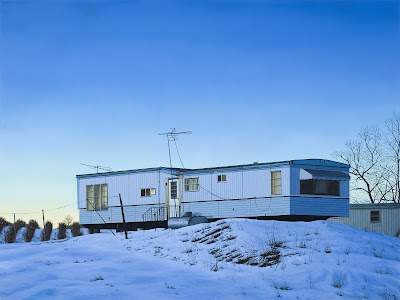 Posted by david brickman at 1:41 PM