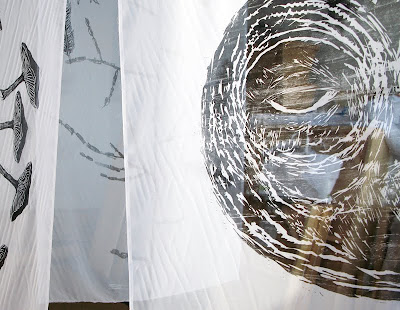 Desiree Alvarez, The Contents of the Falconer’s Bag, 2011
The last exhibition at Union College's Mandeville Gallery to be mounted under longtime curator Rachel Seligman's watchful eye has just ended, as has Seligman's 13-year tenure there. She moves on to become an associate curator at the Tang Teaching Museum, and this last show, co-curated by Middlebury College photography instructor Sally Apfelbaum, has been dispersed.

But the show, Of Weeds and Wildness: Nature in Black & White, leaves traces worth contemplating (as well as a lovely printed catalog). Initially inspired by a small Louise Bourgeois etching titled Hairy Spider, the show brought together a completely unpredictable group of artists working over a range of many decades in diverse media and subject matter. 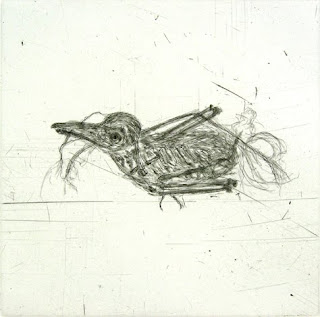 Quite unlike most curated exhibitions these days, and quite unlike the ideas the title put into my head, Of Weeds and Wildness was extremely subtle and anything but a facile look at nature. Viewing the show on its second-to-last day, I was perplexed by the inclusion of work that seemed not to fit the theme of the title, much of which didn't particularly seem to belong together. Perhaps the show was just a good excuse to present some favorite work in under-appreciated media (particularly printmaking) and sensitive shades of grey?

While this wouldn't have been a bad end in itself, the catalog essay explains that the show's intention was not to represent nature, but to "explore the mystery and beauty, romance and brutality of the human experience of the natural world." That makes the inclusion, for example, of Harold Edgerton's chilling high-speed photographs of a 1952 atomic bomb test, or of the mysterious abstract etchings of Kate Temple seem much more sensible.

These and other works in the show reach areas of artistic expression far broader than the title would imply. Other virtually abstract prints by James Siena and Lee Bontecou join Temple, while photographs in the social documentary mode by Robert Adams, Danny Lyon, and Margaret Moulton flesh out the human aspect of the discourse. 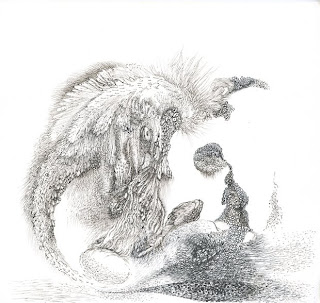 fill tiny pages with imagined naturalistic forms and textures (one is shown at left).

An animated film loop by Hedya Klein, also hand-drawn, has an affinity with Steckler's style and with a beautifully made etching/aquatint by Michelle Segre. Other fine examples of the old printmaking media on view included Kiki Smith's Fawn and Bird Skeleton (shown above at right), two sugarlifts by William Kentridge and a Robert Gober lithograph.

In a departure from traditional forms, Desiree Alvarez created a site-specific installation by hanging swaths of diaphanous fabric embellished with images drawn in ink and printed with wood blocks. Intriguingly titled The Contents of the Falconer's Bag, this piece brought an almost jarring freedom to the otherwise staid presentation of the show.

Overall, it was a show for quiet contemplation, and a fine note for Seligman to go out on. Fortunately, she won't be traveling far, and we can look forward to seeing her future efforts in Saratoga Springs. 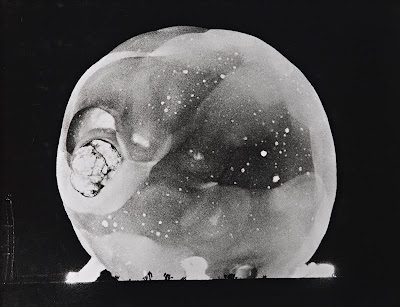 Posted by david brickman at 1:26 PM